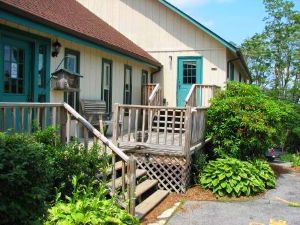 The Town of Seven Devils has always been a "resort" Town, with various recreational facilities available to residents and visitors alike. Beginning in the early 1960's, the Reynolds brothers from Winston-Salem, NC explored the mountain on horseback, and purchased the land, which would be known as the "High Country", a place that "would have more mountain recreational facilities than any other area in the Southeast." The name of Seven Devils is always intriguing; the story of the unique name is that the natives said the wind blowing across these hills in the wintertime sounds like seven devils screaming in the night. And the name stuck!

Development started on the mountain in the mid-1960's, and a resort was formed that provided tourists with golf, fishing, swimming, hiking, horseback riding, and skiing. Tourism flourished for several years, but then the next decade was financially devastating. The residents petitioned the legislature, and became a municipality on July 4, 1979. Back-to-back hurricanes caused the golf course to close in 2004, and the ski slopes to close in 2008, but the Town's year-round resort recreation continues.

Today, Seven Devils' boasts activities that include outdoor settings like Bear Paw State Natural Area, a 148-acre area inside Town limits, and a 264-acre parcel, also inside Town limits, that was recently purchased by the Blue Ridge Conservancy. The Town has its own Otter Falls Park (10 acres), which was dedicated in June 2015, and is being expanded and improved in 2016, thanks to a grant from the North Carolina Parks & Recreation Trust Fund. The Town also has a family park and children's playground, two tennis courts/pickle ball courts, and a covered picnic pavilion. The current Town Council has great vision for the future, with many trails, walkways, and mini-parks in the planning stages. Seven Devils moves forward with a "positive altitude" towards the future!